Daquise – The Colourful Past Behind The Polish Institution

Home » Reviews » Daquise – The Colourful Past Behind The Polish Institution

Join our Club this month and receive an extra 3 months membership for FREE.

Daquise – The Colourful Past Behind The Polish Institution

This legendary hideaway for communist exiles concocted many a scandal; and the secret to why it’s still going strong.  In the 60’s it was the favourite meeting place for John Profumo and Christine Keeler; during their notorious Profumo Affair.  Over the decades it’s been running, Daquise has celebrated rustic recipes from generations; offering a true taste of Polish tradition. 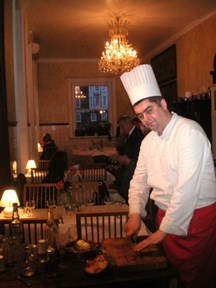 “The tartare is expertly crafted and mixed in front of you”

Fiercely proud people because of what they have had to fight for, theirs is comfort food of sorts, with lots of meats, winter vegetables and sweet and sour flavours.

Daquise delves into a dark past – symbolic of the origins of the Iron Curtain, as Poland led the revolt against Russian communism. When it opened in 1947, it was a refuge for government officials exiled from their country by the Communist regime. Under its own veil of secrecy, plots were hashed here to find ways to overthrow it.

Located in a quaintly boho part of South Kensington, in the same stretch as the V & A reading room and bar, it’s quietly obscure and unassuming.  A touch austere, quirky and even eccentric could describe the atmosphere and deck out.  But don’t let the stripped down walls, rustic seating and the out of place chandelier put you off, since its more about tradition here.  Not your normal swish, chi- chi South Kensington eaterie but the kind of place you can just stroll past and pop in adhoc, when finding yourself in the quarter.

On arriving, we were ushered in by a gentleman who introduced himself as Wojtek; proudly pointing out he was a good friend of the Gesslers, and was helping out whilst they were at their signature restaurant in Warsaw.  As we moved towards the only table with reserved on it, to my amusement my partner said “but we’re not reserved we’re outgoing.”

The humour was lost on our host, who promptly entered into an informed dialogue on what was on offer, and whether or not we would prefer beer or vodka with our meal.  Not being a beer drinker, I opted for the traditional Zubrowka, known in English as Bison vodka.  It’s definitely not to be overlooked as it’s very smooth and soft on the palate.  My partner enlisted himself to try a couple of the staple beers, choosing the rather strong and yeasty ale-like Lech.  If you like beer, you will find a good range here from malty or yeasty ale to the white beers of Kronenbourg ilk.

We were both not going to pass on having the steak tartare as a starter, chopped and mixed expertly right in front of our eyes, by the chef on a robust wooden table.  The gig here is that the craft of it is captured, and I was pleased to have tasted the best tartare I have tasted in a long time.  For the main my basic dish of braised beef with bouillon and cabbage sounded like a school dinner equivalent of boiled beef and cabbage – but that was where the similarity ended.

I felt like I was being given the same warmth and care as if I was being looked after at home.  The chef came to the table and separated the bouillon from the beef and vegetables and lovingly spooned it into a side bowl, then swiftly doused the beef with a buttery béchamel sauce that was simply divine.

Having the pan brought to the table and showing the careful process of separating jus from the juices of the meat and having them execute it in front of you adds to the rustic charm of Daquise.  My partner chose the Kaczka roast duck with red cabbage and raisins, and whilst the duck was roasted to a perfection of crisp on the outside and moist inside, the raisins made the red cabbage too sweet.

At Daquise the customer is not treated with pomp and circumstance but with care and attention not out of place in a family context.  You are made to feel part of a community; and a meal here is more than a good time, but an insight into the warmth and cultural traditions held onto by generations.